A Complete Guide To The Australian Terrier A Complete Guide To The Australian Terrier

If you’re considering getting an Australian Terrier as your pet, you’ve probably wondered about the lifestyle and training of the breed.

From Bossy to Bodacious, the Australian Terrier is a unique breed with different personalities.

Here’s a complete guide to the Australian Terrier, including its body type and temperament, training needs, and health concerns.

Keep reading to find out everything you need to know about this energetic, playful dog.

If you are looking for a pet for the whole family, look no further than the Australian Terrier. 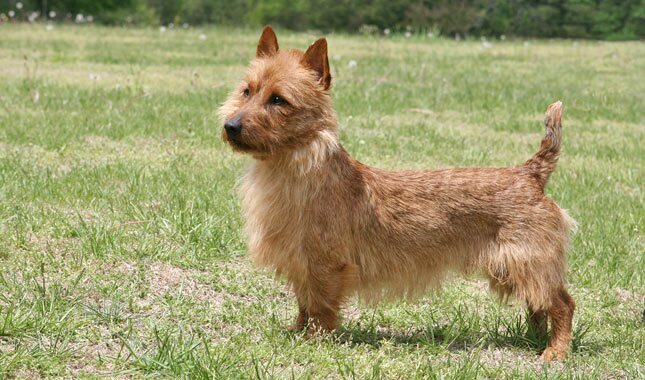 This lively breed of dog enjoys being a part of a family and is great for children.

However, it is important to socialize your Aussie when it is a puppy and keep in mind that it can be destructive around young children if left alone for long periods of time.

Australian Terriers are also great playmates for children and can be trained to be gentle around children.

The Australian Terrier’s head is very distinct, with a flat skull and a silky topknot. The muzzle and skull are nearly parallel, and the ears are set high above the topknot.

Its jaws are strong and meet in a scissors bite. The teeth of this breed are so large that judges have been surprised, but they are important for catching and dispensing prey safely.

The lips of the Aussie are tight and dark brown with black rims. The Australian Terrier requires plenty of exercises, especially for its high energy level.

You should allow your dog at least thirty minutes of high-energy play every day. Walking and playing fetch will do wonders for your Aussie Terrier’s physical health. While Australian Terriers have a high energy level, they do not usually eat too much. They do, however, need regular exercise to burn off their energy.

A Complete Guide to the Australian Terrier will provide you with tips on how to care for your Aussie Terrier and keep him or her happy and healthy.

The Aussie Terrier is a relatively new breed of dog. The breed originated in Australia and was recognized by the American Kennel Club in 1960.

The breed’s first appearance was in an 1868 dog show. The first Australian Terrier was exhibited as a rough-coated Terrier in Melbourne.

The Australian Terrier Club of America was founded in 1957 and became a member club of the AKC in 1977.

READ ALSO:  What Is The Average Lifespan Of A Dachshund?

The body type of an Australian Terrier depends on the breed.

The average Australian Terrier is slightly underweight and has a short, rugged double coat with a rough, shaggy look. The outer coat is roughly two inches long over the body and is longer on the head and chest. The tail is short and raised, and it is usually docked, per FCI breed standards.

They were first shown in British and Australian dog shows in 1906. AKC recognized the breed in the U.S. in 1970.

Several minor kennel clubs also list the Australian Terrier as an official breed. These breed standards are the foundation of terrier shows.

It’s common to see the breed in show rings or on television.

Though Australian Terriers are hardy and don’t need extensive exercise, they do have a few health issues that need to be addressed.

Specifically, the breed is prone to Legg-Calve-Perthes disease, hip dysplasia, and luxating patella. These problems are treatable with surgery.

Because Australian Terriers are not couch potatoes, they are happy with daily exercise. While it’s easy to exercise your Aussie indoors or outdoors, it’s important to keep him safely confined in a secure place when he’s free.

The Australian Terrier has an extremely distinctive coat and style. Its shaggy, long coat is characterized by a topknot.

The breed’s long ears and rugged appearance are the hallmarks of its appearance. While it can be a mischievous dog, it’s also a wonderful companion.

They are hardy, energetic, and tenacious. And that’s what makes them such popular dogs.

A typical Aussie’s coat is dark, with thick hair and a medium-sized chest. These features make Aussies ideal pets for active households.

They can also be great watchdogs, as they are alert watchdogs. Their active lifestyle makes them excellent companions, but Australian Terriers are not suitable for all homes.

These dogs can be active and require daily exercise to avoid boredom. You can take care of their coat by brushing it often with a wet cloth.

As with most dogs, the Australian Terrier is prone to health problems that are hereditary.

READ ALSO:  How Do You Decode Your Dog's Vocal Language? For example, hip dysplasia is a common problem, but the breed does not have a high incidence. In contrast, the Norfolk Terrier has a one hundred times higher affected rate.

According to the Australian Terrier Club of America, this dog breed is susceptible to allergic dermatitis.

As a result, owners of Australian Terriers should be aware of health concerns and follow best practices when breeding their dogs.

The Australian Terrier is prone to a number of different health concerns. For example, it is prone to diabetes, seizures, and cruciate ligament rupture.

However, many pet insurance providers don’t cover all bases when it comes to these ailments.

Their loving personalities and eagerness to please make them ideal for families with small children.

In addition, the Australian Terrier is known for having low shedding, making them ideal for homes with small children.

While the Australian Terrier is a well-behaved house dog, it still requires daily exercise. Regular jogging, a moderate walk, or an off-leash run will help you give your Aussie enough exercise to stay happy and healthy.

While it is a low-maintenance breed, the wire coat needs occasional brushing and trimming around the feet.

Because the Australian Terrier was bred for rough conditions, frequent bathing can cause ear problems and even lead to ear infections.

Regular ear cleaning is crucial to prevent any problems from developing. The Australian Terrier is a small, versatile companion dog with a long history as a hunting breed.

Often, it is happiest when people are around. It may develop separation anxiety if left alone for long periods. It may bark, dig, climb, or fly to escape confinement.

In addition, the Australian Terrier may show a territorial behavior. It may also not be like other female dogs in her territory.

Obedience training is very important for an Aussie.

These dogs are very stubborn and independent, so it is imperative to establish your role as a dominant owner. Obedience training will make it easier for you to communicate with your Aussie and help you resolve common housebreaking problems.

READ ALSO:  The Red Goldendoodle: A Very Rare And Expensive Dog Breed! - Check Him Out!

Here are some tips to help you begin the process. The first thing you must remember when training an Aussie is to make the training sessions fun and challenging.

This way, your dog will enjoy the training session. Make sure to use positive reinforcement as often as possible.

Aussies respond well to positive reinforcement, so it is important to keep training sessions short and frequent.

Reward your dog for good behavior by giving him lots of praise and affection. After training, try to give him treats and playtime.

Obedience training for the Australian Terriers is important for a number of reasons.

While their temperaments may make training difficult, they are easily tamed and can learn new tricks. Obedience training will also help you manage your Aussie better.

A well-trained Aussie will be an excellent pet.

While Aussies are loyal and loving pets, they may be standoffish around strangers. Try socializing your Aussie by giving it a pat on the head or scratch behind its ear. They do not like being alone, but they do well with other pets. Nonetheless, they might have problems with pets of the same gender.

If you live in an apartment, make sure to have plenty of space for play. Obedience training for the Aussie should begin early, preferably during puppyhood.

This will ensure that the Aussie enjoys the training process and does not become bored easily.

Also, Australian Terriers need to be socialized with other dogs so that they do not develop a fear of other animals.

It is important to start early with your puppy so that he can socialize with other dogs.

Obedience training for the Australian Terrier should be positive so that it will gain confidence in you. Positive reinforcement will also help keep the training sessions short.

Finally, we hope you found this article interesting? And what do you think about ”A Complete Guide To The Australian Terrier!?”