HomeAnimalsAll The Facts & Info You Need To Know About The Black-Tailed...
Animals Almost extinct in the 1970s, the black-tailed prairie dog was once a candidate species on the Federal List of Threatened and Endangered Species.

Today, they are not classified as threatened, but they are still rare by historic standards.

The Black-tailed prairie dog lives in family groups called coteries and breeds only once per year. Females go into estrus for an hour, and the resulting litters are three to eight pups. 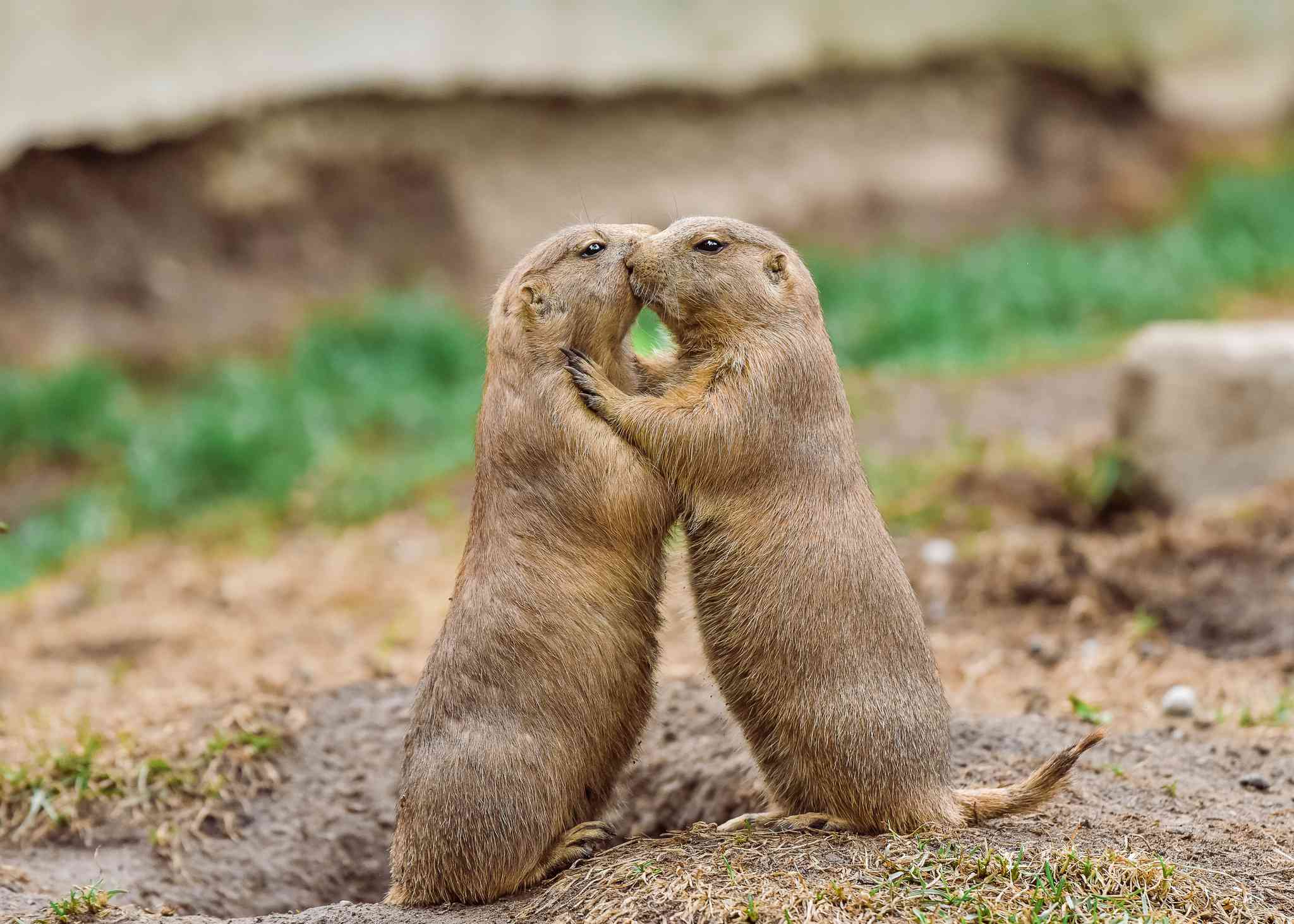 Only half of these pups survive the first year. Each coterie consists of one or two breeding males, several females, and female pups.

The males tend to move around during breeding season, but females usually stay within the same coterie for life. Prairie dogs live in coteries, and each group has its own territory.

The prairie dog population fluctuates from about 12 individuals per 2.5 acres, with each family consisting of one to four females and their young.

The coteries protect their territory from intruders and other prairie dog coteries.

While prairie dogs are solitary animals, they sometimes live with other prairie dog species in the same area. Prairie dogs live on grassy plains in communities called “towns.”

A prairie dog can live in a town of 10 to several hundred members. These communities are divided into smaller units and communicate through different calls.

Prairie dogs are active during the daylight hours but may stay underground in cold weather. The animals can also be found in the city. Prairie dogs are known to bark. Coteries are underground nests that protect prairie dogs from predators such as hawks, black-footed ferrets, and men.

So the name, Coteries of the Black-Tailed Prairie Dog.

Prairie dogs also make loud, acoustic sounds when they hear a human or other predators. These calls vary in frequency and are arbitrary in nature. A black-tailed prairie dog will bark at a predator at different rates, depending on the speed of the human approaching.

READ ALSO:  The Beauty Of Birds Is Seen In African Green Pigeons.

Prairie dogs have developed sophisticated communication strategies. The jump-yip display is a highly contagious way for black-tailed prairie dogs to communicate with each other.

These displays include raising the anterior torso above the ground and sometimes propelling themselves from the ground.

A ‘wee-oo’ vocalization is also emitted during the jump-yip bout. The entire process takes around a second.

This signal is important because black-tailed prairie dogs communicate with each other and can detect when a fellow prairie dog is trying to make a move.

Slobodchikoff’s discovery that prairie dogs have a complex language is truly amazing. His research has led to the development of a complete guide to this language.

The linguistic system is complex and expressive and contains a wealth of information, which forms the basis for language. Slobodchikoff has even developed a software program called Zoolingua to help people translate the animal language.

This tool will be used to translate animal language into human-readable language.

In addition to its unique vocalization and unique behavior, the black-tailed prairie dog also has a secretive way of communicating with each other.

The prairie dog will often kiss each other to communicate, but the exact meaning of these actions remains unknown.

Despite these mysteries, the prairie dog is an incredibly interesting species to observe.

If you’d like to see prairie dogs in their natural habitat, consider visiting the Black-tailed Prairie Dog’s territory.

While most prairie dogs are omnivores, the black-tailed prairie dog is an exception.

Their diet consists almost entirely of vegetation, and they occasionally eat grasshoppers, cutworms, and other insects. Although the black-tailed prairie dog does not drink water, it will eat grass and other plant materials if it can.

You can find this prairie dog at the San Francisco Zoo, as it is known to be a good choice for pet owners.

The black-tailed prairie dog is diurnal, which means that it is active throughout the day.

Their activity levels below the surface decrease when the temperature falls below a certain temperature or when snow covers the ground.

This means that they are mostly dormant during the winter, but they are active and visible in the spring.

In addition to influencing the vegetation in their habitat, black-tailed prairie dogs also have a huge impact on the surrounding wildlife.

Their presence attracts many predators to their habitats. Despite their small size, the black-tailed prairie dog is a surprisingly robust creature. It weighs between 1.5 and 3 pounds and can have a tail length of up to 10 cm. Unlike other prairie dogs, males tend to be larger than females.

Their tails are long and black with black tips. They are also short, with small ears located close to the head.

Despite the long lifespan of the black-tailed prairie dog, half of its pups will die during their first year. In human care, however, these prairie dogs can live up to eight years.

Prairie dogs are highly charismatic rodents that spend their days scavenging for food. They also spend time in burrows, which feature toilets and nurseries. Prairie dogs also use these burrows as listening posts, which they use to watch for predators.

While they spend the day active, they are dormant during periods of cold weather and minimal precipitation in spring and summer.

The black-tailed prairie dog has suffered the consequences of habitat loss and destruction. Habitat fragmentation and eradication efforts are causing the population to decline.

Likewise, plague and road construction are affecting their population. Even with all these threats, prairie dogs are still rare in the wild.

Despite these problems, they are still an important part of the native ecosystem and are less of a threat to ranching interests than previously thought.

The black-tailed prairie dog plays a critical role in the ecology of the Great Plains. It contributes to the health of grassland ecosystems by grazing and digging up the soil. Prairie dogs are essential for the lives of many species that depend on them. They also provide homes to burrowing owls, black-footed ferrets, and rattlesnakes.

These animals are known for their bark-like calls. They are similar to ground squirrels and have a tan-colored body and tail, with black tips.

They can weigh 1.5 to three pounds, although males are generally bigger.

Black-tailed prairie dogs grow up to 8 years in captivity and can live as long as eight years under the care of humans. Their burrows can have thirty or more entrances per acre.

Black-tailed prairie dogs are endangered species in their native range.

Colorado Parks and Wildlife monitors black-tailed prairie dog populations and has contracted with an environmental consulting firm EDAW to gather baseline data throughout their range. CPW conducted fixed-winged aerial surveys of the eastern prairie to estimate their population and relative status of colonies.

These surveys were part of the agency’s overall contribution to the decision on whether to list black-tailed prairie dogs as endangered.

The prairie dog is vulnerable to several diseases, including plague. This disease, caused by a bacterium called Yersinia pestis, can infect humans via the saliva of infected prairie dogs.

To avoid exposure, keep your pets away from prairie dog towns. A black-tailed prairie dog has specific daily activities.

It forages during the day, interacts with others, maintains burrows, and scouts for predators.

It also has a “sentinel” prairie dog, who stands on a mound and emits a series of whistles, before retreating to its burrow.

Black-tailed prairie dogs live in colonies less than half a square mile. They feed mostly on grass, roots, and other plants that are high in moisture and nutrient value.

They also clip vegetation in colonies to keep a clear view of predators. This means that a single prairie dog can eat as much grass as a thousand-pound cow!

Finally, we hope you found this article interesting? And what do you think about ”All The Facts & Info You Need To Know About The Black-Tailed Prairie Dog!?”