HomeAnimalsAll The Facts & Info You Need To Know About The Honey...
Animals The Honey Badger is a fascinating creature. This adapted, fearless, intelligent, and fierce animal has a variety of attributes. Here are some facts about it.

The Honey Badger has a thick skin that protects it from stings from bees, porcupine quills, and dog bites. In addition, it seems to be resistant to snake venom.

The Adaptable Honey Badger is an amazing creature with an incredible ability to adapt to any environment. 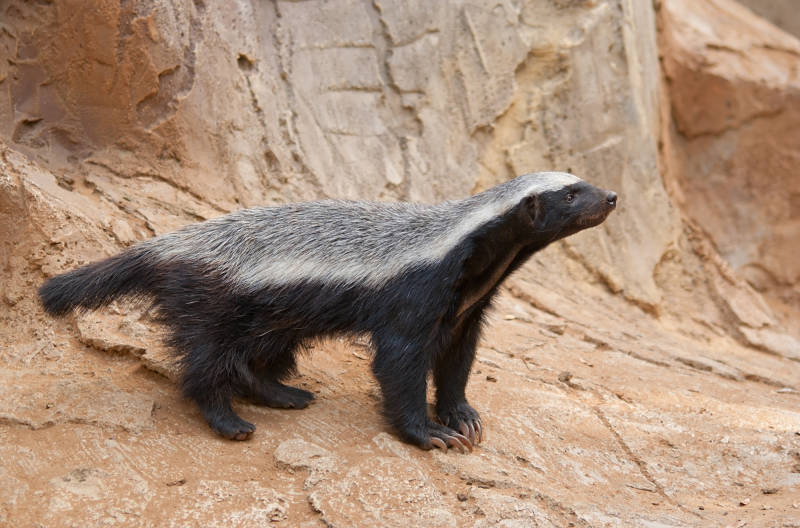 While males have more territorial marking than females, the former are more likely to interact with each other and urinate in an area where they had previously foraged.

Because of their adaptability, the badger can be found in a variety of habitats, from sea level to over 1700 m.

The badger is a very hardy creature, able to move easily through small spaces and can survive in harsh environments. The Adaptable Honey Badger is an opportunistic omnivore with a diverse diet. They will feed on nearly any animal that moves, from fruit to small mammals.

Their diet changes with the seasons, depending on the availability and abundance of prey.

Despite being an opportunistic predator, the badger will also take a meal from a larger animal if it is a good fit.

The Fearless Honey Badger is a very strong, aggressive animal, and it has an uncanny ability to scare humans and other animals alike. Its incredibly powerful jaws and sharp claws make it almost impenetrable, but luckily the skin on its neck is very loose, which gives it the opportunity to turn around and slay bigger enemies.

This animal has been known to take down lions and other large animals, so the next time you see a badger, remember to keep your distance.

The Fearless Honey Badger is a quadrupedal, terrestrial creature that has a black face and legs, as well as a white stripe down its body.

Its thick skin and powerful claws make it highly resistant to attacks from humans, but it can also easily wriggle free of predators’ grasps. These features help it fight off attacks with great agility. The Guinness Book of World Records has recognized the Fearless Honey Badger as the most fearless creature in the world.

This beautiful animal can reach up to 25 pounds in weight, although it is much larger in males. It stands 12 inches at its shoulder and can live for up to seven years in the wild.

READ ALSO:  Are There Animals Having Down Syndrome?

Unlike many other animals, it will attack honey bee hives to obtain their food.

In the new film “The Intelligent Honey Badger,” Brian Jones describes a rescued honey badger named Stoffel who was a loner who looked like a lumpy rodent. It turns out, however, that Stoffel was an extremely intelligent creature. The honey badger’s large brain is evidence of its intelligence.

In addition to its large brain, the animal has been shown to use tools to build bridges, open their cages, and increase their height.

While some scientists argue that honey badgers are highly intelligent animals, others disagree and maintain that chimpanzees are superior to humans when it comes to problem-solving.

One such case is that of the ‘Stoffel’ honey badger, who escaped the enclosure of its owner by piling up rocks and then walking out!

Clearly, this badger is a Houdini of the animal world! Even Brian was surprised by Stoffel’s ‘untrained’ behavior and has re-examined his previous opinion. While the brain size of these animals is not comparable to their size, the fact that they are so intelligent is certainly an impressive feature of their nature.

If you want to learn more about this amazing animal, read the article below.

The name “Fierce Honey Badger” may give the impression that the animal is a wily warrior, but that is not entirely true. These powerful creatures are not afraid of human conflict, and their size and strength will give them an edge in the battle.

These animals have strong jaws and claws, 1.5-inch claws, and the teeth to break even the toughest tortoise shell.

In addition to their agility, the badgers’ hunting skills are also impressive. Although they are not known for their vicious behavior, badgers are strong creatures by nature.

Because they live in dangerous and threatening environments, they must be tough. They never back down, even in the most stressful situations.

Hence, they have been nicknamed the “World’s Most Fearless Animal”. They are so tough, in fact, that they have faced lions and hyenas.

READ ALSO:  All the Facts & Info You Need to Know About Eld's Deer The Fierce Honey Badger is a small, three-and-a-half foot creature. They weigh about thirty pounds and look like a skunk on PCP.

However, the animals are fierce enough to keep out any animal of a similar size. There is no other animal in the world as tough as a Honey Badger.

You must watch this video to appreciate its ferocity! This animal will surely give you a fright!

A 5-million-year-old honey badger-like animal was recently discovered on the West Coast of South Africa. This is a fascinating discovery because it shows that there were many carnivorous animals roaming the landscape five million years ago, including giant wolverines, otters, bears, and even giant hyaenids.

This smaller cousin to today’s honey badger has been around for centuries, and scientists are still trying to figure out how it got there.

The scientific name of the honey badger is Melivora capensis. It is a carnivorous animal found throughout the world.

It is not dangerous to humans but is extremely tenacious. The Guinness Book of Records lists it as the world’s most fearless animal.

This animal is capable of surviving in a variety of habitats and even has the ability to change its habitat to avoid predators. The honey badger is a carnivorous animal found mostly in the Southern African region. It is nocturnal, has a great sense of smell, and lives in burrows and hollow trees.

Although they are largely carnivorous, they also occasionally eat plants and wild fruits.

It gets its name from the fact that it can be found on honeycombs with the help of a bird called a honeyguide.

A badger’s immunity to snake venom is not surprising considering their omnivorous diet.

Honey badgers are omnivorous, consuming plants, berries, roots, and bulbs. Although they often prey on insects, birds, and rodents, the badgers will also target larger mammals.

The badger has evolved antivenom to prevent venomous snake bites. Because of their thick hide, they do not easily succumb to a snake’s venom.

In an evolutionary study, the University of Minnesota’s Danielle Drabeck looked at the genetic mutation responsible for honey badger resistance to snake venom.

The researchers found that four different animals have a mutation that blocks the receptors for nicotinic acetylcholine.

While scientists had assumed that pigs had thick skin and lots of fat, they found that this resistance was not necessary.

READ ALSO:  Which Animals Would You Find In The Mesopelagic Zone? The fact that snakes can’t detect venom in pigs suggests that immunity is a result of predators and prey locked in an evolutionary arms race.

In other words, snakes are getting more powerful and more resistant, while immune animals are upgrading their defenses.

Researchers found that a-neurotoxin, the chemical substance that causes the pain of a snake bite, has evolved in four different species of mammals.

The resistance has been traced to two distinct biochemical mechanisms that result in a blockage of the toxin’s binding sites.

It is primarily believed that the badger’s resistance to snake venom is due to mutations in the cells.

The solitary honey badger is considered a protected species by the Convention on International Trade in Endangered Species of Wild Fauna and Flora (CITES). However, despite their status as an endangered species, solitary honey badgers have been killed by beekeepers worldwide.

The lack of international legislation concerning the badgers has contributed to the high number of deaths.

There are currently only two countries on the endangered species list that do not require a permit for trade in these animals.

Honey badgers live a solitary life, interacting with other animals only when they seek to mate.

Although primarily nocturnal, honey badgers can also be active during the day, depending on the activity and threat level. During the day, honey badgers curl themselves into a protective ball. However, despite their seemingly friendly nature, honey badgers can be aggressive and invasive in nature.

Although badgers are not harmful to humans, they can be destructive to bees and poultry. As a result, they are often considered pests by farmers.

In some cases, they have even killed people. Their meat is edible and their fur is used in traditional medicine.

Sadly, the solitary badger may be on the verge of extinction, but the good news is that you can help protect it by protecting it in a nature reserve.

Finally, we hope you found this article interesting? And what do you think about ”All The Facts & Info You Need To Know About The Honey Badger!?”